I didn’t realize how multi-useful these humble household items really could be… until one morning as I was cleaning out the coat/trash/potato and onion closet. I pulled out the empty wire grill basket I usually store potatoes in to wash it and Kyler knew right away what it’s for. “Tatoes!” Caught me a little by surprise there, little fella! Actually yes, that is for potatoes. I fished out five healthy potatoes from the top shelf and handed them to him.

Oh boy was he happy! His imagination took him all kinds of places with those potatoes. He lined them up on the coffee table and then yelled for me to come see his “choo choo tain”. He hid behind the throw draped over the arm chair with his precious potatoes… a long time. I didn’t notice everything he did with those new toys of his, as I was delighted to hurry wash up the breakfast dishes without his splash-ful “elp” for once.

It’s not a happily-ever-after story here with the potatoes. He took them outside and started throwing them to the dog to chew up. Which I didn’t particularly appreciate because that’s wasting some perfectly good food, so I had to put a stop to it.

A few days later… enter pushpins. I know it’s not usually considered a safe alternative to the lovely basket of toys in the corner, but trust me, I watched him closely on this one. I’m pretty sure he got into them by pushing the coffee table (It has wheels on the bottom so willingly goes anywhere with a little kid-sized umph.) over to the shelf where I had a container of odds and ends, including a handful of the brightly colored thumbtacks. Kyler has this fascination for anything that he could harm himself with…cleaners, knives, guns, pins, scissors. And he rightfully calls these pushpins “owies”. He entertains himself with these for literally hours. 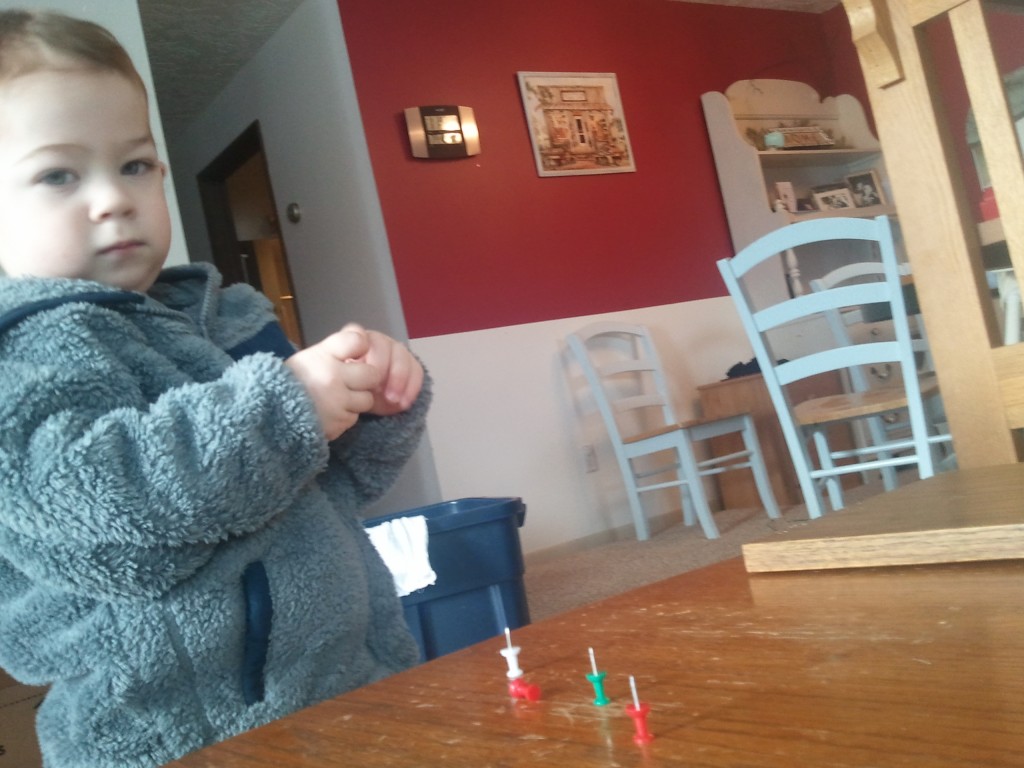 He’ll balance them on their heads standing up on the coffee table and when all five of them are standing in a row he’ll look over at me, point both index fingers into the air (he hasn’t quite gotten the thumbs up yet) and say “whoo hoo!” Or he’ll poke them into a cardboard box and pull them out again and repeat the process with a little different pattern every time. 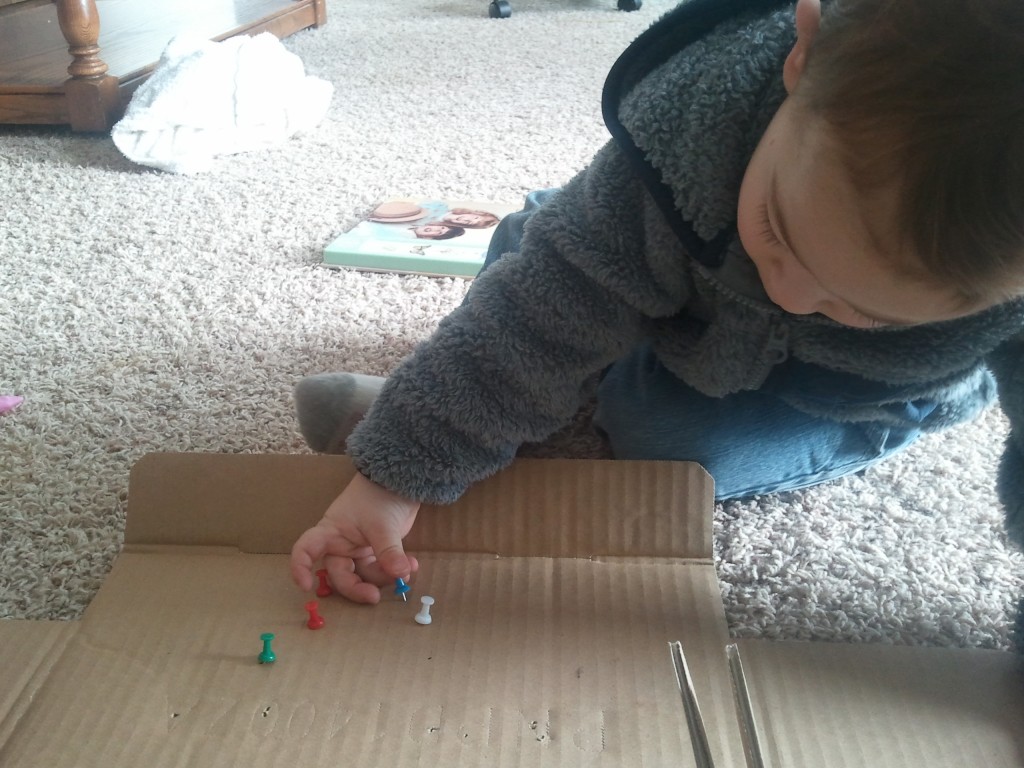 And then he’s got this tenderish side to him I guess. I just bought a sweet little book with the music buttons on the side that you can push and it’ll sing a song to you while you look at the pages. And so he’ll corral his little pushpins all into a small pile and gently lay the book on top of them, push a button and tell me he’s singing to his “owies”. 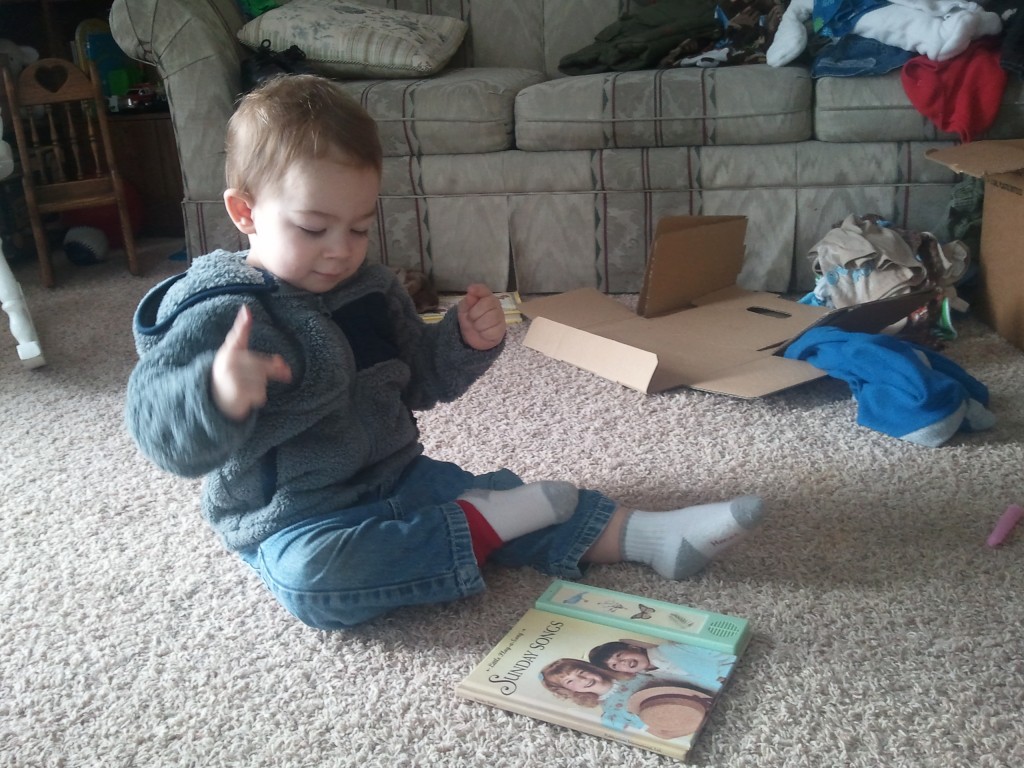 Who knows what’s the next imaginative thing he’ll come up with next. He might even decide to take a little more interest in his toy basket.

That is if his Daddy isn’t flying his cool new quad-rotor UFO helicopter around the room.

I’ve finally done it. After rolling it around back and forth, to blog or not to blog… here I am!

My talented husband Jacob so professionally took my design inspiration and created my own little place in cyber space. Dance of Home Life. I found the inspiration for the name while reading the book “Passionate Housewives Desperate for God”.

I have had many fears of starting a blog… the biggest one being that I’d get distracted from the most important things in life. Serving God by serving my family. I just cringed at the image of me sitting on the computer while the kids ran wild and ate peanut butter and jelly sandwiches every other day.

But we’re Bushnells, and boy, we will have stories to tell! 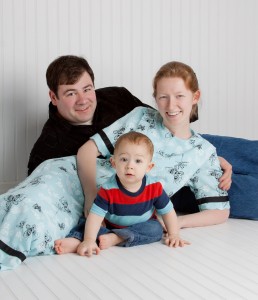 So I have two main purposes in creating and keeping a blog.

I like to imagine I’m opening my door and inviting you to come in and see and experience life with us. So please (step over the toys and) pull up a chair and make yourself at home!